All over the world the population of humans is soaring, the habitats are being polluted or destroyed, jungles being cleared, strip mining, logging and farming are taking their toll, and the animals are being slaughtered for meat or superstitious medicine.

We seem to be sleep-walking towards a concrete jungle.

The seas and rivers are overfished, the natural world is built over.

It’s time to make clear lines of demarcation – 50% for us and 50% for the rest of the animal life.

It is almost too late.

I often feel that I prefer most animals to human beings. They are not so cruel and stupid.

Dian was an American Zoologist who worked with gorillas in the Congo and Rwanda. She fought poaching and tourism and ended up being murdered. Her famous book (and film) ‘Gorillas in the Mist’ was the story of her work. Without people like Dian there wouldn’t be any animals left. We are too stupid to realise that we are part of this huge web of life. If we remove it we cut off our own legs.

Gorillas have 99% the same genes as a human being. They are social, intelligent and wonderful creatures. Yet we are slaughtering them for meat! The sooner we make killing gorillas, chimps and other primates the crime of murder the better. It distresses me. 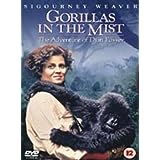 “When you realize the value of all life, you dwell less on what is past and concentrate more on the preservation of the future.” …

We need to. It is being destroyed by the minute. We must be desperate to preserve it.

“The more you learn about the dignity of the gorilla, the more you want to avoid people.”

I prefer animals too. People are nasty.

Gorillas are almost altruistic in nature. There’s very little if any ‘me-itis.’ When I get back to civilization, I’m always appalled by ‘me, me, me.’

It is the blind greed and selfishness that is destroying the planet.

I feel more comfortable with gorillas than people. I can anticipate what a gorilla’s going to do, and they’re purely motivated.

People are devious. They lie and deceive. They flatter in order to knife you. You can’t trust them. I know where I am with most animals.

Our closest cousins. We are chimps too. They are people.

The Chimps are hominids just like us. We share 99% of our coded DNA with chimps. We evolved from a common ancestor around 3-4 million years ago. That is recent.

There are two species of chimps. The Bonobo is presently on the verge of being wiped out.

We are really the third species of chimp. We have slight evolutionary modifications. We have evolved bigger brains and lost a bit of fur.

Chimps can use tools and can learn to speak a number of words. They exhibit a lot of the emotional complexities and learning behaviour of humans.

Presently, as our numbers surge and our lust for food, timber and land increases, we are destroying their habitat and butchering them for bush-meat.

We need to start caring for our wild-life and limiting our numbers. We are destroying the planet.

We do need to save these wonderful and intelligent people.

We share ninety nine per cent of our genes with the chimpanzees and gorillas. They are the closest relatives we have left after we eradicated our fellow human Neanderthals.

They are hunted for bush-meat. Their babies are prised away from their dead mothers and sold. Their hands and feet are hacked off and sold as trophies.

The forests they live in are opened up with logging roads for the hunters to exploit; then the trees are sawn down to leave bare soil.

Their numbers decrease and the destruction is relentless as our numbers soar and greed, selfishness and necessity create a tsunami that is rolling over nature.

It fills me with hopeless despair.

Ninety nine per cent of us

We haven’t been around so long and yet we’re running the planet. We’re out of control.

We think we’re so clever but look at the mess we’re making of things!

We can be so kind but we are the cruellest animal who ever evolved.

We run on power.

We fight for more than we could ever need.

Our greed is extraordinary. We’re like wolverines in a chicken-run.

The planet’s become our play thing.

And we’ve only just begun!

In a garden without a single tree

Who built a lavatory.

In my veins and DNA.

Inherited through my genes

To bring atoms into play.

From the African Savannah

Right out to the stars

Who string up guitars.

Wonderful three videos. That Robin Williamson film really cracked me up. After watching that how can anyone deny that gorillas are human? Beauty is more inside than out in my opinion. Not so sure about the David Attenborough recitation of What a Wonderful World but the beauty of the wildlife is breathtaking.
The only sadness is that we are trashing it.

Just a random selection of videos for your viewing pleasure !

As a number of animals (Gorillas, Chimps, Orangutans, Whales, Dolphins, Porpoises etc.) have a large intelligence it makes sense to regard them as ‘people’ – individuals with their own consciousness and sense of identity.

By accepting their level of sentience and conferring ‘human’ status on them we would automatically confer status.

It would, in law, be an act of murder to kill one of these animals. Hunting them would be a major crime. To imprison, torture or be cruel to one of them would open the abuser to a different level of justice through the courts.

I believe it would make a big difference to the life of these creatures and help humans too. We need to become more civilised and develop a far better attitude to nature and the needs of life on this planet.

What do you think?

The old prevailing attitude was that human beings were not animals. That we were made by god in his image.

The DNA evidence, couple with any cursory look at our far from perfect ‘design’, shows quite clearly that this is not the case.

It used to be thought that we alone displayed intelligence. That is now known to be false. Many creatures display quite marked intelligence. We are probably not even the most intelligent creature on the planet!

It used to be believed that the animals had been put here by god for us to use or abuse as we saw fit. This is dangerous nonsense. Animals have nervous systems and experience pain and discomfort in exactly the same way that we do. There can be no excuse for inflicting pain or torment on any living creature.

So now we come to the thorny question. As many animals are conscious, sentient and intelligent – should we afford them ‘human’ status and give them similar rights to that of human beings?

So which creatures are ‘worthy’ of being given this status?

In my view all animals, but if we go for those animals that have been shown to have a high level of intelligence then we could form a list of suitable candidates:

Now we know that a number of birds, monkeys and other creatures display a remarkable set of intelligences. Maybe some of them are worthy of being called human? I would be interested to hear your views.

The last one – In the cage

As a child I was taken to London zoo. I stood in front of the small cage in which Guy the Gorilla was housed. He looked out at me with sad rheumy eyes. He seemed so human.

There was a great resignation. Guy was bored to tears.

We humans have evolved from a branch of apes that gave rise to the gorillas and chimps. Only one percent of our DNA is different. Our greater intelligence is the result of a small number of changes. It is responsible for our technology and the weapons and tools with which we are busy destroying the planet and killing everything that lives.

We assume that all those chimps and gorillas have no intelligence.

They have plenty of wisdom. It is merely different to ours.

Our binocular vision coupled with that opposable thumb has enabled our tool making and our technology. It has enabled us to destroy our cousins.

I think they know their days are numbered.

The last one – In the cage

Say you have no soul

But I see the sadness –

The knowledge of your fate.

That hand with thumb

And finger to pick

We share ninety nine per cent of our genes with the chimpanzees and gorillas. They are the closest relatives we have left after we eradicated our fellow human Neanderthals.

They are hunted for bush-meat. Their babies are prised away from their dead mothers and sold. Their hands and feet are hacked off and sold as trophies.

The forests they live in are opened up with logging roads for the hunters to exploit; then the trees are sawn down to leave bare soil.

Their numbers decrease and the destruction is relentless as our numbers soar and greed, selfishness and necessity create a tsunami that is rolling over nature.

It fills me with hopeless despair.

Ninety nine per cent of us

As they roam around.

Secure in their ground.

Around them trees are tumbling

Yet it could be a sly shot

Writings on the wall.