It is hard to believe that battles were fought over this ground, that once it was alive with tracer, explosions and bullets, that soldiers yomped and stormed.

The gateway to the Antarctic – nothing to do with sovereignty (another poisonous idea) – more to do with oil and minerals.

I was fortunate enough to visit a colony of Gentoo penguins at Bluff Cove. There were predatory Skuas around looking to snaffle eggs of youngsters. Some of the penguins were comics. Some just wonderful.

As we approached the Falklands there were many Giant Petrels around our boat. These birds have wingspans of seven feet. The Falkland islands came into sight. I was enjoying myself.

We walked through to the Pink Palace where Eva Peron gave her speech to the people. Then the Cinco De Mayo Plaza with all the placards and demonstrations for the missing – ‘The Disappeared’ – and the dead from the Falklands/Malvinas.

After having my fill of penguins – there being only so much you can take in of the same scene no matter how many different angles and ways you look at it (I had attempted to suck them into my memory banks. There was nothing more that could be achieved) I wandered off to take in the scenery. That was almost as magical. This was summer in the Falklands. You could tell that because we only needed one jumper and a single jacket and waterproof. We were assured by Jamie that this was an outstanding day. The sun was shining and it wasn’t too windy. As I peered over the desolate bay I wondered what it might be like on this desolate island in winter. 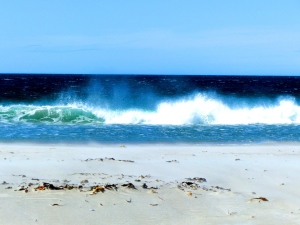 The bay was beautiful. The sea was blue and the sand was white. The light was soft and clear creating a spectacular pastel effect. It reminded me of the light out in the Orkneys. It had that same delicate quality.

I watched as the waves crashed in and the wind whipped the spray off them. There were two penguins standing on the beach studying the waves. I imagined them as a pair of friends discussing the weather. I had a walk around, took a few photos and soaked up the beauty.

It was time to head for the fabled sea-cabbage café and museum for a warming cup of tea and slice of home-made cake. The tea was as English as you could ge and the cake tasted as if it had been baked by a branch of the Women’s Institute.

I wandered round the museum and marvelled at the wool creation produced by the jovial proprietess.

It was time to head back to Port Stanley. That was an experience.

There were signs of this secluded colony participating in black magic rites. I imagine there is little else to do in those endless dark winter months but to do it so openly was remarkable. There was a bust of Margaret Thatcher on open display and they had even named the road after her. That is truly satanic. 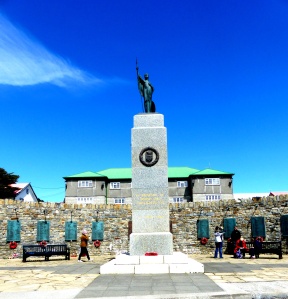 I looked across the strait towards the hillside where the various regiments had left their marks spelt out in rocks.

We walked past the church and post office with its bright red pillar box and telephone box. If it hadn’t been for the whalebone formation in front of the church it would all have been more English than England.

We went to the café for a hot mug of cocoa and then on to the pub festooned with union jacks and regimental colours. We climbed up the hill and looked down into the harbour. It was such a little settlement, such a quaint bit of Britishness on the edge of the Antarctic.

A fur seal greeted us on the jetty as we boarded the lifeboats.

As we turned and headed back to Argentina the sun was setting and the islands were encased in an orange glow. 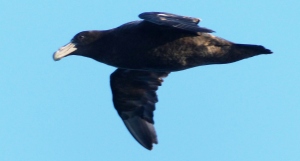 Over two days the excitement was mounting. We were heading for the Falklands. It was coolish. We’d lost the heat of Brazil a while back. There was no lolling in the Jacuzzi on the top deck. We were out of our shorts and sandals and wrapped up in fleeces. At the front of the boat a group of ardent bird watchers had been perpetually huddled. I think they lived there. To compensate for the rapidly cooling weather we were getting a glimpse of more interesting birds. It kept the twitchers in a constant state of enthrallment. As I joined them for furtive short periods of scanning the seas for signs of whales, dolphins and seas they eagerly recounted to me, in hushed voices, that a storm petrel had spent the night on the boat. It had huddled into a corner of the top deck. One of the doughty birdmen had actually picked it up and launched it back into freedom. I wondered, quietly to myself. If that was quite how the petrel might have viewed it. There it was minding its own business, sheltering from the cold and getting a free lift into the bargain, when some tosser tossed back out into the elements. Freedom is relative. Another twitcher, all wide-eyed and disbelieving, explained to me that a Noddy had actually spent the entire night perched on the rail at the stern of the ship. I had pictures of a funny little chap with a pointy blue hat sitting on the rail and was wondering if Big ears was going to join him but I was soon disabused of such a silly notion. A noddy is a bird. I was merely annoyed that nobody had thought to tell me about these treasures so that I could get a photograph of them.

However I did manage to get photos of the Giant Petrels that materialized out of nowhere to drift around in the sky around the ship. They were big birds with a wingspan of half a mile or more, according to one of the bird men. I found it amazing to think of these birds floating about in the sky hundreds of miles away from land and never resting. It was explained to me that they’d evolved a mechanism to shut down half their brain at a time in order to sleep on the wing. I couldn’t see how birds that size managed to stay up in the air at all, let alone for months on end. They were masters of the currents.

I was not. I frequently decided that the more frigid air was good in small doses. But I could see why they hung around the ship – it must have been boring out there with nothing but an unending expanse of ocean. We were entertainment.

The first sight of the Falklands was exciting. The rugged hills and shoreline came into sight looking bright and mist enclosed in the early morning light with cloud caps on the higher ground. As we nudged into the bay, towards Port Stanley, we could see the shore with its 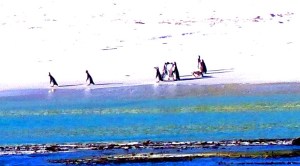 green hummocks and just make out little groups of penguins waddling on the sand. I could understand how an army could easily secrete itself in the place. The island could have been invaded and garrisoned without anybody knowing. It looked rugged and uninhabited. 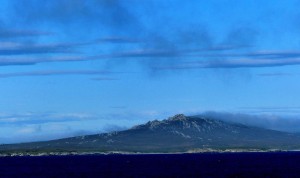 We moored a long way out. We could not, for some obscure reason, get any closer in to the harbor. The sea was choppy and we were going to go ashore via a half hour journey in ‘tenders’. That sounded intriguing. The ‘tenders’ turned out to be our lifeboats. I found that reassuring. At least it meant that the lifeboats worked and that the crew were getting practice launching them.

The journey in was very choppy. We bounced about and were sprayed with water. It added to the drama. I couldn’t help feeling like I was one of the troops heading in to free the island from the fascist invaders. (That strange mood was probably a residue of having accidentally read an account in the Sun or the wonderful Daily Express – you know – those right-wing dispensers of fantasy, establishment propaganda and patriotic jingoism that pass as newspapers.) The moment carried me along. I was going to step foot on the fabled disputed kingdom of the southern Atlantic – the gateway to the Antartic. Of course, it was fought over because of the need to protect its British citizens (nothing to do with the oil and minerals).

If you enjoy my poems or anecdotes why not purchase a paperback of anecdotes for £7.25 or a kindle version for free.

Rhyme and Reason – just £3.98 for the paperback or free on Kindle

My other books are here:

Thank you and please leave a review.