In Search of Captain Beefheart – A Rock memoir 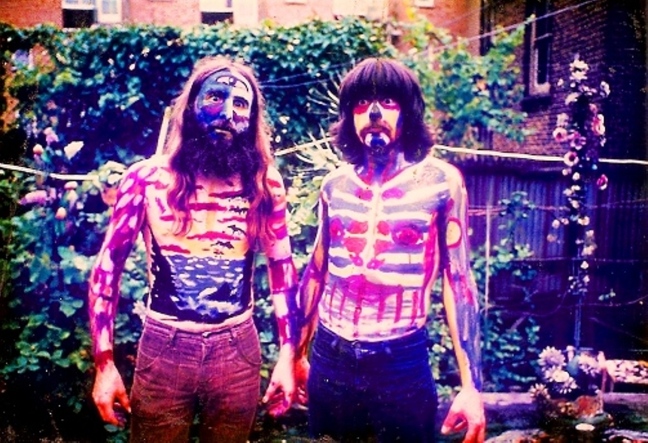 On the starting line

Once I got out of Clive’s bedroom I began my quest in earnest. I looked everywhere I could but there were no signs of my heroes. This was probably due to two things: firstly I was an eleven year old kid living in the Delta region of the Deep South (Thames Delta that is – Walton on Thames) and there was very little in the way of record shops or live venues (Walton on Thames was not renowned for its boulevard cruisin’ in red Cadillac’s or its jiving’ Honky Tonks and Juke Joints) and secondly my heroes were still out of circulation. Woody was going down with the terrible Huntingdon’s Chorea which would stop him performing and writing anymore. Don Van Vliet was probably living out on his trailer in the desert with his mum Sue and hanging out at school with Frank Zappa. Roy was causing mayhem Blackpool way with Beat poetry, feigned madness, army desertion and pregnant girlfriends. Bob was doing his Little Richard impersonations and starting out on the road to putting together his auto-constructed mythology and was about to start singing to Woody in the sanatorium. Son House hadn’t been rediscovered and had yet to relearn the guitar, get back in the studio and be trundled out to white audiences.

I filled my time in by substituting in other heroes.

Hard on the heels of Buddy and Adam I soon discovered Elvis, Eddie, Cliff and then the revelation of Little Richard. He was explosive! ‘Here’s Little Richard’ was an immense album. I became obsessed with it. That voice belting out that basic thumping Gospel influenced yet wholly secular primitive Rock ‘n’ Roll along with his wild pounding piano. He was the true King of Rock ‘n’ Roll. There was no one to touch him. Elvis, who copied a lot of his songs, was a pale imitation in more ways than one. I remember sitting on the sofa with my 52 year old big fat jolly Nanny (Grandmother), who was shortly destined to have a stroke and die, and watching a Little Richard, come-back, hour long TV show in the early 60s. He put everything into it. The sweat was beaded on his face and dripping off him. He stood and hammered the keys, played it with his foot, backside and elbow and pulled off every trick in the book while my Nanny roared him on and bounced around causing the sofa to suffer earthquakes. My Nan was a rocker!

My school had a fete and I took my Dansette there with my record collection and performed as a Juke Box. I charged six pence a play and only played Little Richard all afternoon. I didn’t get to make much but I had a great time!

I finally got to meet my hero not so long ago when he played in Bradford. I took my younger son Henry with me as an essential part of his education (I also took him to see Chuck Berry, Rambling Jack Elliott, Love, The Magic Band, Lazy Lester & Jerry Lee Lewis and suggested he went to see Bo Diddley, the Fall, the Buzzcocks and John Cooper Clarke – which he did). Sadly my other three children were not so enamoured with my musical tastes. Liz thinks they were probably deafened on long car journeys or suffered a surfeit of Beefheart that permanently warped their brain waves.

The Little Richard Show was a strange affair. There seemed to be three elements to it. There was the Rock ‘n’ Roll – but lacking in the energy and athleticism – he was in his mid seventies – but there was also this cloying evangelical Christian crap and a very camp gayness all of which did not quite gel with raw Rock ‘n’ Roll. It left me feeling dissatisfied. I would have loved to have seen him in 1957 when he was revolutionary. Even more disturbing was going back after the show to see him. He was doing a poster signing. There was a long queue and two big black heavies on the door who were distinctly underworld. They collected your £30 quid off you with a very heavy warning: you went in shook hands, had your poster signed – if you tried to get anything else signed, like my original ‘Here’s Little Richard’ album from my childhood it would be taken off me and smashed. I had the feeling that there would likely be a few more things broken in the bargain.

I walked up to get my poster signed by the great Mr Penniman with the guy from the support act. He’d done a great version of ‘Casting my spell’ and I said that it sounded just like the Measles version that I used to love. He was particularly friendly and turned out to have been the lead singer with the Measles.

Following my discovery of Little Richard the next few years of the early sixties were quite fallow for me and lacking in real heroes. The charts, which we all drooled over, were full of sanitised Pop stuff – Fabian, Bobby Darin, Bobby Vee and Bobby Rydell. Some of it was OK and I quite liked Del Shannon, Roy Orbison and Dion & the Belmonts but I drew the line at Bobby Vee and Fabian and had headed off back into the 1950s for my fix. I devoured all the Buddy Holly, Little Richard and Eddie Cochran I could get my hands on and added some Shadows, Gene Vincent, Fats Domino, Huey ‘Piano’ Smith, and early Elvis before discovering the bombshells of Chuck Berry and Bo Diddley.

I didn’t know what I was searching for. I thought I’d found it in good old Rock ‘n’ Roll. It hit you right in the belly and got you moving. I thought everyone should record fast rockers. Rock ‘n’ Roll was great but it wasn’t the whole caboodle. I would grow up a little.

I had a lot to learn.

If you have enjoyed my writing and would like to purchase one of my books I have put some links to my best Rock books below:

In other part of the world please check your local Amazon!

Thank you for looking and please leave a review if you enjoyed the book!!

These are a few of the reviews:

Format: Kindle EditionVerified Purchase
The title is a little misleading; as it is not a book about Beefheart , but rather an account of growing up through the 60s and 70s in Britain. For people like myself 60+ year’s of age and like the author, a keen collector of records and tapes, this book will have a deep resonance. It was like living my early years of music all over again, as Mr. Goodwin kept mentioning the recording artists that I knew.
An enjoyable read, made for the coach, train, or ‘plane trip.
&amp;lt;img src=”https://images-eu.ssl-images-amazon.com/images/S/amazon-avatars/default._CR0,0,1024,1024_SX48_.png”&amp;gt;
Amazon Customer
5.0 out of 5 stars    Quite a ride!

Format: PaperbackVerified Purchase
We move from the rock of a 2004 White Stripes gig to the deep blues of Son House performing in 1968 in the very first paragraph, which gives some idea of the huge range of personal and musical experience covered in this always lively and thoroughly engaging personal testimony. We are taken on a freewheeling and cheerfully anarchic journey across time and space from the earliest days of rock’n’roll through the vibrant 60s and its many musical offshoots and current influences, with every anecdote giving ample evidence for the author’s central idea – that music transforms and inspires like nothing else, forging an organic link with our own lives and even the politics and beliefs we live by. There are sharp, vivid, honest and cheerfully scatological portraits of his musical heroes with warm praise and candid criticism providing the salty ring of truth. The book has wry down-to-earth humour, a breakneck momentum, mostly good musical taste, fascinating gossip, strong opinions, passionate loves and equally passionate hates – and there’s not a dull moment in it. Written with a warm and generous spirit, in the end it amounts to a radical critique of much more than music. It captures the modern zeitgeist with zest and courage. Recommended.
&amp;lt;img src=”https://images-eu.ssl-images-amazon.com/images/S/amazon-avatars/default._CR0,0,1024,1024_SX48_.png”&amp;gt;
Peter
5.0 out of 5 stars   Fast ‘n’ Bulbous!

Format: Kindle EditionVerified Purchase
If you grew up listening to music in the 60s then like me you will love this book, there were so many similarities between my musical awakening and the author’s that it was uncanny, I was never as obsessive about collecting as he obviously was but I went to so many of the gigs that are listed in the book. The book took me back to the days of being a hippy when everything seemed possible and we thought we could change the world with music and love, sadly we were wrong but thankfully the music lives on and Opher captures the spirit of the age perfectly. I found myself longing to get my vinyl out and start playing my old Roy Harper and Incredible String band LPs. The book is well written and shows what a fascinating life Opher has led, for anyone who was there and has forgotten the details this book will delight you and for any serious students of how good music evolved then this book is a must.

Format: Kindle EditionVerified Purchase
How very dare you captain sweetheart weird only to the tone deaf with t h no hearts. Pink Floyd are not just Roger Waters all their best music came from three good music players making up for their average bass player.other wise locally book.

Format: Kindle Edition
If you were there, the 60s that is, and you have forgotten much, and you will have, then this is an interesting memory jogger. It is Chris Goodwins account of the real ‘underground’ music scene of the time and not what is popularly touted to the interested young of today.
If you are genuinely interested in the genesis of modern music and its evolution especially through the 60s and 70s then this is an interesting guide and full of quirky anecdotes which may appeal to the young of all ages

Format: Kindle Edition
Wow, Opher’s amazing rock n roll journey is a must. What a fabulous trip through a lifetime of music and more. Anyone who had a pet crow and 2000 pet mice has gotta be something other than ordinary. Hugely engaging and with buckets full of tales to tell, Opher’s passion shines through on every page. Five stars for sure, keep ’em coming! Rich & Lou
5.0 out of 5 stars… who has lived through the sixties and seventies will LOVE this book

Format: Paperback
Rock music lovers and anyone who has lived through the sixties and seventies will LOVE this book!
I’m glad people have enjoyed reading it!

If you have enjoyed my writing and would like to purchase one of my books I have put some links to my best Rock books below:

In other part of the world please check your local Amazon!

Thank you for looking and please leave a review if you enjoyed the book!!