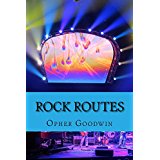 In the early 1960s there were four main groups that were heavily inter-related. They were the Journeymen, The Big Three, the Halifax Three and the Mugwumps.

There was much movement between the various bands. People came and went and Michelle Gilliam, John Philips wife, joined. After a spell working in the Virgin Islands and Puerto Rico the Mugwumps headed to LA to join the Folk Rock scene and morphed into the Mamas and Papas. Zalman Yanovsky stayed in New York and joined up with John Sebastian to form the Lovin’ Spoonful. The Lovin’ Spoonful took off in New York and played in Fisherman’s Wharf in San Francisco helping kick the West Coast scene into ignition.

Everything you ever wanted to know about Rock Music!

If you would like to purchase this book in either digital or paperback it is available on Amazon.