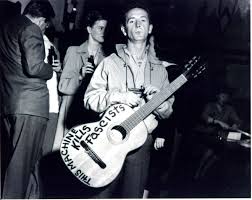 Woody Guthrie rambled round in the thirties, forties and fifties in America. He travelled with black and white alike. He stood for fairness and justice. He stood on picket lines with working men striking for a fair wage and fair treatment. He opposed injustice, racism, sexism and elitism.

He wrote songs like nobody had ever heard before.

It is a simple concept for a complex issue. He was saying that you do not destroy poisonous ideology like fascism and fundamentalism with guns – you destroy them with music, with words, with education. You change the minds not blow up the bodies.

That has informed my life.

Music is a powerful tool for changing people’s minds and awakening their humanity and love of their fellow men and women. The guitar was Woody’s weapon and a powerful one it was too.

Education is the other tool.

We won’t defeat ISIS on the battlefield alone – we need to educate the fools who believe in violence.

If you would like to try one of my books they are all available on Amazon.

In all other countries around the world check out your regional Amazon site and Opher Goodwin books.