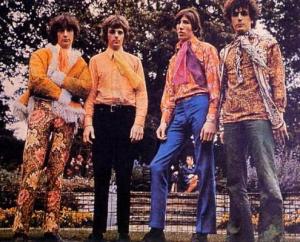 Psychedelia was the name given to the British music produced in the mid to late sixties influenced by the psychotropic substances such as LSD – Lysergic Acid Diethylamide.

The similar type of music produced on the West Coast of America was called Acid Rock. The two styles fed off each other and were an important element of the sixties counter-culture that is stereotyped as ‘Hippie’.

LSD was legal in the mid-sixties (It was only made illegal in Britain in 1966, in 1966 in California but not until 1968 federally). The interaction of the Rock industry and Youth Culture between the UK and US meant that the two scenes were well integrated.

The Rock musicians in the mid-sixties were indulging in a lot of hallucinogens. The results can be heard in the music of the day. In 1966 a definite Psychedelic tinge was discernible. On the Revolver album the Beatles were producing numbers like ‘Tomorrow Never Knows’. This was a sign of what was to come. Other established bands, such as the Yardbirds (with the immaculate Jeff Beck on guitar), were producing numbers like ‘Over Under Sideways Down’, The Pretty Things were producing the Rock Opera ‘SF Sorrow’ with tracks like £SD. Eric Burdon split the Animals up to create the New Animals. The Who were releasing tracks like ‘I Can See For Miles’ and the Move ‘I Can Hear the Grass Grow’.

The earliest Psychedelic sound was actually an album by Alan Watts called ‘This is It’ and early converts were Donovan with ‘Sunshine Superman’ and Roy Harper released the psychedelic ‘China Girl’ on his first album.

1967 was the year when Psychedelia went interstellar. Pink Floyd led the way with their ground-breaking ‘Piper at the Gates of Dawn’. Syd Barrett was the mastermind of the spacey Sci-fi ‘Interstellar Overdrive’ and the fantasy imagery that was to become part and parcel of Psychedelia. Hendrix was blasting us with ‘Axis Bolder than Love’ with numbers like ‘Spanish Castle Magic’. The Beatles came out with ‘Sgt Peppers’ and the Stones did ‘Their Satanic Majesties Request’. There were a plethora of other bands including Arthur Brown, Family, Traffic, Tomorrow, Spooky Tooth, Edgar Broughton, Soft Machine, Procol Harum, Incredible String Band, Moody Blues and Action. Blues Bands like Cream got in on the scene with their Disreali Gears album and Pete Green’s Fleetwood Mac released ‘Green Manalishi’.

The clubs were full of light shows and happenings.

The charts were full of psuedo-psychedelic Pop such as the Lemon Pipers, Status Quo, the Flower-pot Men and Scott McKenzie.

Out in the streets it was different. There was a social revolution. The British and American counterculture were burgeoning and Acid Rock with Captain Beefheart and his Magic Band, Jefferson Airplane, Grateful Dead, Country Joe & the Fish, Big Brother and the Holding Company, Buffalo Springfield, Doors, Byrds and Quicksilver Messenger Service were setting the pace.

All the clubs were full of Psychedelic sounds and US Acid Rock and there were a plethora of smaller bands like Blossom Toes, Andwella’s Dream, Syn, Idle Race, Misunderstood and Dantalion’s Chariot.

The fashions also reflected this Psychedelia. Paisley and fluorescent colours were in. It was all colourful and voluminous – very trippy.

The repercussions are still audible today!