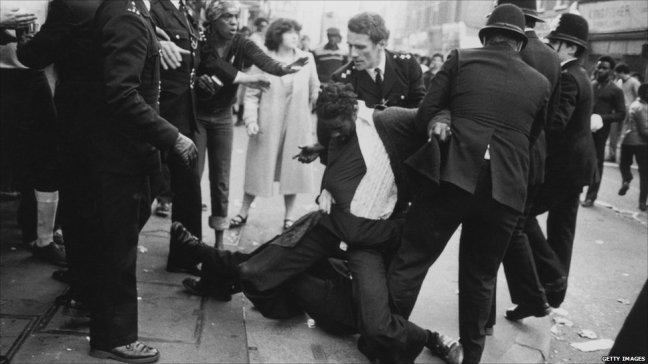 In the 1980s, at the height of the Thatcher years of depression and oppression, the black community in London was suffering more than most. There was widespread unemployment not helped by the institutional racism of the day. The crime rates went through the roof.

At that time there were racist National Front and British Movement thugs on the streets who would attack blacks. The police were considered the enemy. They would hound and arrest black youths on Sus charges (Stop and Search) and were considered racist. It was felt that the police were stopping blacks without cause and treating them without respect. The black community felt threatened and under attack from all sides. There was anger.

There was a terrible fire at a party in New Cross in which killed thirteen black teenagers (another committing suicide later) and which was thought by the black community to be a racist arson attack.

The community was simmering with fury. Passions were high. None of it was helped by the Press who portrayed the situation from the establishment view and did not seem to consider the black community perspective. The flames were being fanned.

The spark was lit through a possible misunderstanding. A youth was stabbed and police went to his aid. The rumour was that the police were killing him or allowing him to die. It set a riot in motion.

Linton Kwesi Johnson was our foremost black poet. He put his poems to reggae music and represented the black voice. He intoned his dramatic words in his rich melliferous voice using patois. The results were stunning. Through his music he became the spokesman for the black community. He logged the emotions and perspective of the besieged people of Brixton.