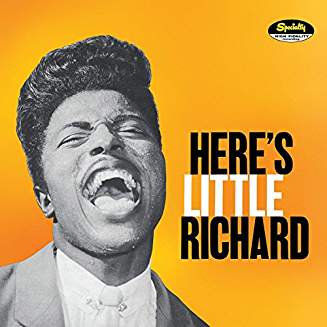 What does Little Richard mean to me? – High energy, visceral excitement!!

I first heard Little Richard when I was thirteen way back in 1962 prior to the Beatles.

The charts were full of tidied up Pop-Rock in the form of Tommy Roe, Bobby Vee, Bobby Rydell, Fabian and Pat Boone – the sanitised Pop Idols. Then there were the British equivalents – Cliff Richard, Billy Fury and Tommy Steele whose brief Rock excursions had been guided back to the middle of the road. That cleaned up Pop had never done much for me. I had been introduced to Buddy Holly and Eddie Cochran. I liked the excitement of real Rock ‘n’ Roll.

Auntie BBC had hardly played any of that raucous vulgar Rock ‘n’ Roll, particularly of the black variety, so it was all underground and undiscovered – a lodestone of genius waiting to be discovered.

That was when those trembling little thirteen year old fingers somehow alighted on ‘Here’s Little Richard’. I can’t even remember back through fifty five years of life to where I got it from. I think it was an older boy in school who sported a huge pompadour quiff and was also into Chuck Berry who sold it to me.

From the first moment that needle hit the groove with that introductory click and crackle before Tutti Frutti roared out and I was hooked.

I played that album to death. My stand-out tracks were Long Tall Sally, Ready Teddy, Jenny Jenny, She Got it, Tutti Frutti, Slippin’ and Slidin’ and Rip it up. That isn’t to say that the others weren’t great but I was young and I loved the fast stuff – the stuff with that vitality.

I’d never heard anything with such power. That voice blew me away. This was the energy I craved.

At the school fete I set up my dansette and was a jukebox all day. I took all my records but the only one I played was Little Richard. People came along and paid their 6d to hear him booming out and frightening the old folks.

I still have that original album. I’m holding it in my hand this minute. It’s bit scratched up and battered. The cover is a bit tatty and something’s been spilt on it. But I cherish it still. It holds more memories than music.

I took that album along to get it signed by the great man. I got threatened by his heavies who assured me that they’d break it if I dared to take it out. I couldn’t risk that could I? Never mind. He signed my poster (even though it cost me £25!). That’s good enough.

Little Richard was the epitome of Rock and Roll. No-one has surpassed that raw energy.

I’ve got Rip It Up marked out for my remembrance service!

‘Long about ten I’ll be flying high,
Walk on out unto the sky,
But I don’t care if I spend my dough,
‘Cause tonight I’m gonna be one happy soul,
I’m gonna rock it up……….