What a delight it was to see Nick again. He is not just a performer but someone who gives of himself, who shares his songs rather than performs them. His personality shines through and embellishes the music. A Nick concert is always like meeting up with an old friend.

The guitar playing is so brilliant and Nick never ceases to give of his best. You can see the immense concentration he puts into it.

All the tricks were there. Except they weren’t tricks. The altered tuning, bending notes, strange chords. Then there’s the voice – with such unique range. Nick has always had this wish to push the limits of his capabilities. He builds his songs around the extraordinary sounds he can create.  And those songs are extraordinary. The audience were mesmerised.

This was the Fordwych Road concert.

It took me right back to Flat 5 58 Fordwych Road, to Les Cousins and that magic short period of time when the likes of Bet Jansch, Davey Graham, Jackson Frank, John Renbourn, Sandy Denny and Roy could be seen for a few shillings. This was the magic time of acoustic Folk. Every one of them was pushing the boundaries, competing, trying to outdo each other. They all had their first albums out. Something was bubbling but nobody was famous.

Les Cousins was a kind of oasis in Soho, a watering hole where you could catch up with friends and delight to cutting edge music. Sometimes there were three of these megastars on the same bill. It all felt impromptu, casual, intense and like family. One or other of them would fit in a little three song set between the others. They all hung about together, playing in each other’s flats, learning off each other, being blown away by some new song, new tuning, new finger-picking. There was a competitive camaraderie.

We thought it would last for ever but it didn’t. Within a short while all of them had become something more – stars in their own right. They outgrew the Les Cousins scene and grew apart. The family was broken.

Can you imagine seeing the likes of Bert, John and Roy all performing together in a small club, milling about with the audience?

Nick took me back to those happy days. When he talked about Roy and Flat 5 I could picture it. I was back there with Roy, Mocy and Nick as a toddler. When he played the songs of Bert, John, Jackson, Davey, Paul, and Sandy it brought memories flooding back. It was like I was back in that cellar in Soho. He captured it. The songs were beautiful, the execution exquisite and the atmosphere perfect.

In these days when music is all too often a background noise, where everything has been heard and done, and the excitement has diminished, it is hard to imagine how important these early pioneers of acoustic music were. They blazed the trail. I was privileged to be there and watch them do it. They created new styles, new ways of writing songs, and extended the range of acoustic music all in the space of a couple of magic years.

What they achieved is now absorbed into the canon. Nothing can ever have that impact again. It was a time when so many brilliant creators came together in one place to bounce off each other and produce such groundbreaking work. The chemistry was unique. The result scintillating. For a young punter like me it was ecstasy to watch them do it.

Nick conjured it up from the ether. I wallowed in nostalgia.

It was also so good to hear Nick praising his old man and playing a couple of his songs. My Friend always makes me feel sad about Jackson and Highway Blues (which Nick does brilliantly) takes me back to my days hitching.

But this wasn’t just an evening of sentiment. Nick is special. He brought it all to life. It was real. 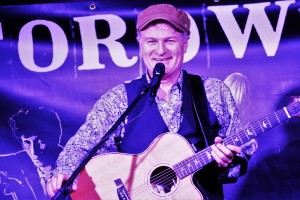