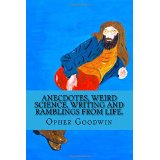 It was a dark, wet, dank March evening. I had been running an evening course on Rock Music. This evening it was the West Coast sound with a focus on Captain Beefheart. I remember that because I can remember gathering up my vinyl albums which had been in the boot of the car and had ended scattered down the road. Miraculously they were unscathed.

I had finished my class at nine-thirty and picked my two sons up from their grandmothers. We were heading home. That involved weaving down four miles of windy back lanes.

I came over the hump-back bridge near the golf course and turned the corner by the reservoir. I could see a pair of headlights coming towards me at speed but I was used to such things. As it approached I noted that the car concerned was going very fast. It must have braked for the bend.

What followed I saw as three separate images. They were so fast it was as if they were separate photo shots and not a continuous flow.

I saw the front wheels of the approaching car twitch.

It was broadside on and right in front of us.

There was an explosion.

The front end of our car had disappeared. The whole bonnet and engine had been pushed into us and was steaming.

The other car was in front of us and on its side and there were cries and screams coming out of it.

The steering wheel of my car was back almost to the seat.

I turned to my oldest son. He was conscious. His face was covered in blood. He looked stunned. His legs were snapped and bent up in front of him. My other son in the back had taken his seat belt off to lie on the seat. He had been thrown forward into the front seats and was beginning to cry in pain.

The doors of my car were bent into Vs by the impact.

People started appearing on the scene. They had heard the crash and rushed to see if they could do anything. I gathered my wits and started kicking at the door. Someone wrenched at it and we prised it open. I managed to clamber out. I got into the back to see how my younger son was. I could see he had bad injuries and was in a lot of pain but it did not seem to be life-threatening – so far as I could tell. My son in the front seat seemed far worse. There did not seem to be any room for his lower legs. I imagined them severed or crushed.

A doctor arrived, rigged up a drip and gave my son some pain relief. I was guided further away while they worked on him.

Eventually the ambulance arrived, police cars and a fire engine. They cut the roof off the car and peeled it back. They removed my younger son into the ambulance and rushed him away.

That same man kept talking to me, telling me it would be alright, the experts were there; they knew what they were doing. My sons were in good hands. It helped but I was so helpless.

My wife arrived. She was distraught. The people that had come to help included a friend of ours. They phoned my wife and told her the news.

It took two hours to cut my older son free. After an age they managed to get him into an ambulance.

At the hospital my boys were rushed into surgery. I was x-rayed. I had bad bruising, multiple cuts on legs, face and across my chest. My eye-lid was cut right through. But I was alright. I could walk.

My older son had suffered breaks to both femurs, a broken hand and glass impacted into his face. They were life threatening injuries. His chances of surviving had been 10%. The blood loss usually induced shock. The doctor’s rapid arrival with that drip had saved his life.

My younger son had a dislocated hip, broken leg and hand.

They were in traction for weeks, in the case of the eldest – for three months. But they lived and walked again, even played football and snow-boarded.

They released me from hospital the next day. My wife picked me up. I had a compulsion to visit the scene of the crash and go to the garage where they had taken the car. When I walked in, very gingerly, the garage owner went pale and sat down.

He told me that he travelled the county picking up cars from accidents and he had never seen a car so badly damaged in which there were not multiple fatalities.

I had to sit in the car and run through the events until I had everything clear in my mind.

The car that had gone into us had been travelling at around a 100 MPH. A group of teenagers had been out joy-riding. It had happened so fast that I did not have time to hit the brake. The impact was around 130 MPH.

The thing that had saved me was that the impact had been at an angle. It had struck the passenger side first pushing the steering wheel to one side and throwing me around it and into the windscreen. The seat-belt had stopped me being thrown through.

That impact might have been worse for my older son but then we had all survived. If it had been full on, we might all have died.

I only climbed back out of that car when I had the whole thing clear. I had to be sure that there was nothing I could have done.

Then I went home.

7 thoughts on “The crash”